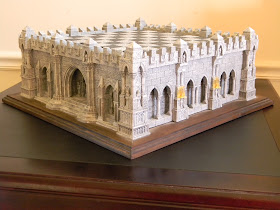 J here with a product/technique that has some applications pretty much anywhere. Bear with me, it's worth the trip.

I'm by hobby a wargamer. I also like making stuff and think games work better when there's as much appeal as possible. Nice art, sexy boards, good cardstock. You know, added value. So I got into wargame terrain in high school and college, skills that have gone on to help me with some pretty amazing models in my design career for the stage.

But to crank out dungeons and castles for things like D&D, it was a little harder to just mass produce that stuff. These days, a few companies fill that gap, but one lets the designer in you really shine: Hirst Arts Castlemolds.

These are a personal love of mine. It's basically amazing medieval LEGO that you make at home. By ordering the molds from Bruce (the designer who lives in Sedalia, MO, not far from where A & I met and later lived for quite some time), you get high-end silicon rubber molds of his extremely precise bricks and blocks. Mix up plaster and fill the molds and you can build anything your materials can support.

To be fair, the initial outlay for this product is not cheap. Each mold is from $21 to $42 dollars, with the average workhorse mold costing $32. That having been said, I'm unaware of one of these molds failing pretty much ever and I've cast some of my molds well over 30 times with no appreciable tearing or loss of flexibility. So, over time, you can get your purchase down to well under a dollar per pull.

But what do you get? Each mold is jam packed with architectural goodies, and the Castlemolds line covers Gothic stone, fieldstone, wet organic caves, industrial pipes, Egyptian hieroglyphs, futuristic panels and flourishes, even Roman columns and smooth-cut marble. Plus dozens of styles of floors and accessory molds for barrels, buckets, doors, planks, stairs, forges, fires, and piles of gold coins. There is basically no wasted space on one of these things, and if you want to make 3D widgets and bobs for wargaming, there's essentially no substitute I'm aware of that lets you build it yourself like this. 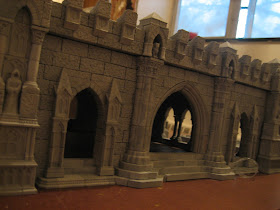 I bought my first mold in 2001 and built a project for an ex-girlfriend and the mold promptly disappeared. (I may well re-buy that mold sometime in the future because it had a 1/4" arrow slit block that doesn't appear anywhere else in the line and I quite liked it.) I followed the new molds pretty closely after that and had my heart set on project for my father for his birthday one year. So, I saved my pennies (Literally. I stashed our change and rounded all of my pay checks down to the next five dollars and stuffed the remainder into a Pringles can with a slit in the top) and bought a big damn order of molds and a 50-pound box of dental stone (the plaster used to make casts of teeth for dentures and whatnot) and started casting my little heart out. I posted a schedule in the apartment and mixed plaster, scraped molds, and popped out bricks for a couple weeks straight (150 total castings of 6 different molds), filling shoe boxes from a dollar store with individual plaster bricks, sorted into plastic cups by part type. It got... intense. 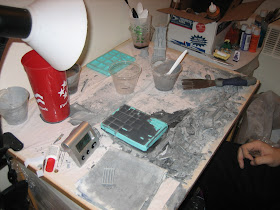 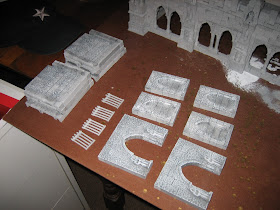 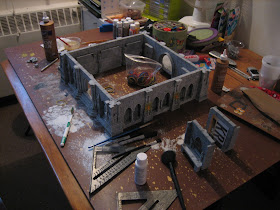 Following plans on Bruce's website, I built the Gothic monstrosity you see below. I opted for a nice hand-made wooden set of pieces instead of the overtly fantasy suggestion on the website for two reasons: 1) I didn't know that my dad would be impressed with a spiky fantasy crew of pieces and I've always intended to hand-turn a set once I own a lathe, and 2) buying the miniatures just to paint them and use them as chess pieces almost doubles the cost of the project. This thing isn't cheap to begin with, so every little bit helps. 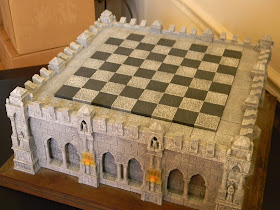 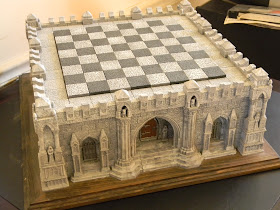 So, that's the Gothic chess set, with custom stained wooden base. My dad and I play a game on it every time I visit, and it was a great way to recognize my father's birthday, honor the time we spent all through my childhood playing chess, and excuse the purchase of these totally sweet molds.
But what else can be done with them, aside from elaborate sibling-shaming presents and nerdy wargame pursuits? Well, I have a couple projects coming up in future posts that might just help you justify grabbing up a couple of these things on your own. Stay tuned for future Castlemolds projects!
withourpowerscombined at 4:35 PM
Share